Dublin Through the Decades Scavenger Hunt

Take a trip down memory lane by participating in the Dublin Through the Decades Scavenger Hunt. Spend some time this summer visiting Dublin's most notable historic sites and track your progress in the GooseChase app. Participants who complete the challenge will receive a prize to commemorate their journey through time. The scavenger hunt will run from June 13 through August 4.

Bring your completed game to the Dublin Civic Center Parks and Community Services counter (100 Civic Plaza) to claim your prize. Prizes must be claimed by August 12, 2022.

The City of Dublin would like to thank City Historian Steve Minniear for his continued support and assistance with this activity.

Don't Have a Smart Device?

If you don't have a smart device you can still play! Collect points by visiting the landmarks listed in the link below throughout Dublin from June 13 to August 5. Take a selfie with the sign that has the City's 40th Anniversary Logo on it and show the pictures to the Dublin Civic Center Parks and Community Services counter to claim your prize. 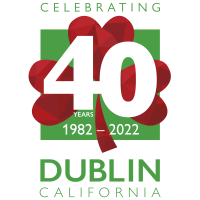