Zone 7 Water Agency announced that it has completed facility upgrades at the Patterson Pass Water Treatment Plant which improves treated water quality with the added ozonation project, and an increase of the treated water storage capacity. This is the latest investment to make the treatment process more efficient and improve water quality to better serve the community.

“By investing in best-in-class technology, Zone 7 demonstrates our commitment to high-quality water,” said Board President Angela Ramirez Holmes. “Ozonation is a proven, successful treatment method that will improve our water, making it cleaner, safer and better tasting – straight from the tap.”

The Patterson Pass Water Treatment Plant, which has been serving Zone 7 since 1962, has been treating imported surface water from the adjacent South Bay Aqueduct using dual-media filtration and chlorine treatment techniques. In recent years, treating this water supply has become increasingly difficult due to the high levels of organic matter and more frequent algae bloom that can cause taste and odor problems.

The blooms are normal but are becoming more frequent. After reviewing various treatment technologies, Zone 7 selected ozone to replace chlorine as the main disinfectant, resulting in higher quality water provided to customers by reducing chlorine-related byproducts and killing even more pathogens than chlorine.

About Zone 7 Water
Zone 7 Water Agency is one of the 10 active zones of the Alameda County Flood Control and Water Conservation District. The District was established by the State Legislature in October 1949 to solve problems of flooding, drainage, channel erosion and water supply and conservation in Alameda County. In 1957, by popular vote, Zone 7 became a special district governed by a seven-member board of directors. Along with flood protection, Zone 7 supplies water to all of eastern Alameda County and a population of over a quarter million residents. Treated water is sold wholesale to local retailers, including the cities of Livermore and Pleasanton, the Dublin San Ramon Services District, and the California Water Service Company. Zone 7 also distributes untreated water to local agriculture operations and golf courses. 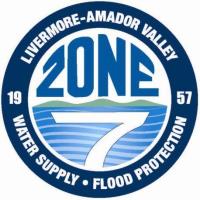